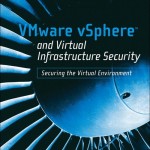 VMware vSphere and Virtual In!astructure Security: Securing the Virtual Environment (Prentice Hall) is written by Edward L. Haletky with the assistance of our friend, Tim Pierson. Another friend, Christofer Hoff, wrote the Forward. Pierson is currently working with us to integrate the power of HPSS in his security courses. (Very cool!) Hoff is a forward thinking security professional who is respected among his peers. The book immediately confronts the security issue with VMware. Chapter 2 presents the “anatomy of an attack.” Attack perspectives are from a Pentester, a hacker, a script kiddie, and a disgruntled employee.

Chapters 6, 7, and 8 focus on deployment, management, operations and virtual machine security. Some common operational issues are discussed to protect and audit your environment. Chapter 9 is especially useful, posing real-world questions discussed on the VMware VMTN Communities forums. The latter part of the book features a patch for Linux, a security hardening script, and an assessment script output. A reading list and links are included in the final section. A great addition to your IT library from Amazon for $40.56.