I read this article this morning about a movement by TSA to create “approved” laptop bags that would allow passengers to go through airport security without removing their laptop from their laptop case.

This appears to be really true. It really isn’t a joke. In fact, at first blush, it might even seem like a good idea. But…

The interesting part is that it is literally only a bag for your laptop. No power cords, media or other devices.

Now I don’t know about you, but I carry a LOT more stuff than just my laptop in my backpack. If you want an example, here is one from an article a while back in ITWorld. 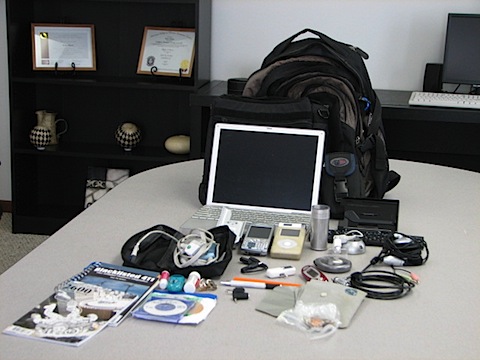 As you can see, there’s a lot more than my Mac in there.

While the idea of not removing my laptop seems like a good thing to me and I am sure that it would save us all time in the security line in a perfect world, I am completely unconvinced that even the most basic of laptop users only carries their laptop in these things. I can’t imagine that there would be any real time savings as the TSA explains that only “approved” laptop cases bearing the official TSA seal will be allowed and that you can’t have any folders, paper clips or anything else tucked around the laptop… Blah, blah, blah…

Ordinary citizens still can’t seem to figure out if they can take their makeup, water or beer on the flight, let alone whether or not they need to remove their shoes for the not-so-nice man with the badge. I still routinely have to wait behind people asking the same questions and others hopping around like a pogo-stick rider while they unbuckle, untie and wiggle off their shoes/boots/leggings/etc.

How on earth will special laptop bags even have a prayer of saving us time? Even worse, the whole idea of creating the bags, testing them, approving them and controlling counterfeits or unapproved bags with look alike seals – seems to be a place for a HUGE amount of tax payer dollars to get wasted. Can you imagine the large-scale bureaucracy that would take?

I say forget it. Just keep the same process going of laptop removal. It seems a lot easier, cheaper and as Bruce Schneier would remind us – just as useless in terms of real risk reduction anyway….