Here’s another use case scenario for HoneyPoint Security Server. This time, we show the methodology we use to scope a HoneyPoint implementation around protecting a specific set of Intellectual Property (IP).

If you would like an in-depth discussion of our process or our capability, please feel free to reach out to us and schedule a call with our team. No commitment and no hard sale, guaranteed.

If the graphic below is blurry on your device, you can download a PDF version here. 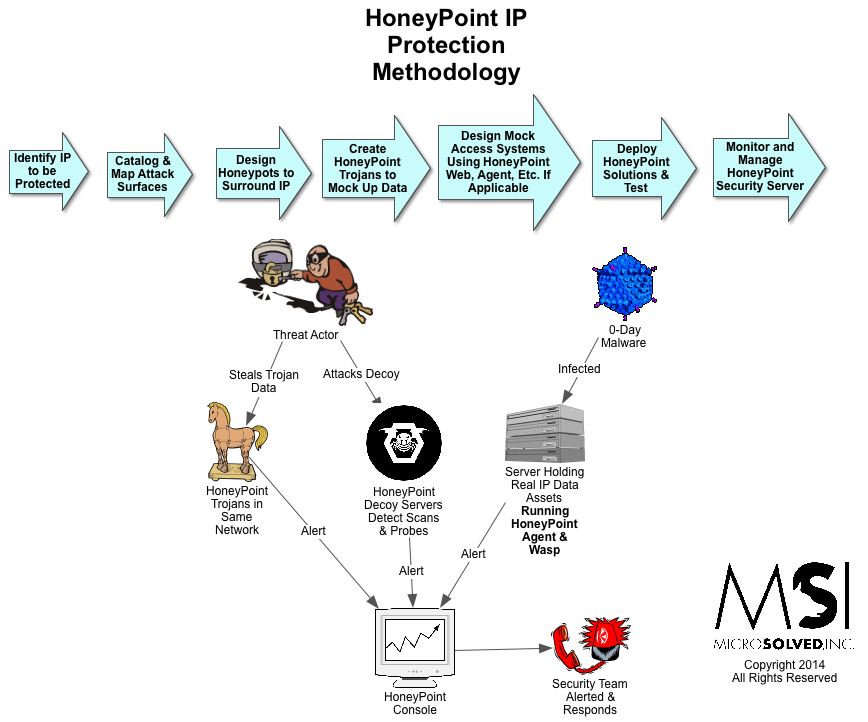 Here’s another quick overview graphic of how HoneyPoint Trojans work. We have been using these techniques since around 2008 and they are very powerful.

We have incorporated them into phishing exercises, piracy studies, incident response, intrusion detection, intelligence gathering, marketing analysis and even privacy research. To hear more about HoneyPoint Trojans, give us a call.

If the graphic below is blurry on your device, you can download a PDF version here.

We have been getting a LOT of questions lately about how HoneyPoint Security Server (HPSS) fits into a Point of Sale (POS) network.

To make it pretty easy and as a high level overview, below is a use case diagram we use to discuss the solution. If you would like a walkthrough of our technology, or to discuss how it might fit into your specific use cases, please let us know.

As always, thanks for reading and for partnering with MicroSolved, Inc.

PS – If the graphic below is difficult to read on your device, you can grab a PDF version here. 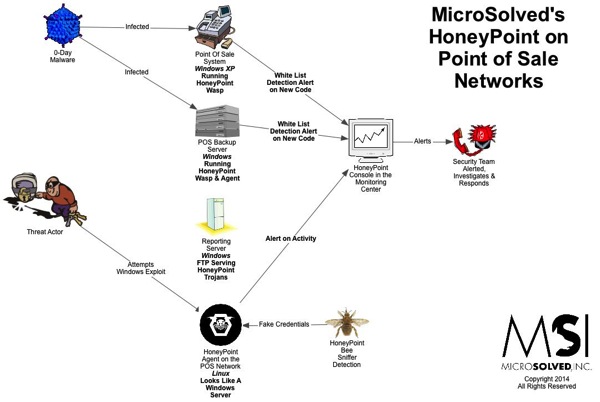 Recently, there have been several questions about potential deployment scenarios for HoneyPoint Security Server in and around ICS and SCADA organizations. Here is a quick, high level view of what a sample deployment might look like in a utility or other ICS environment. Note that the sample environment has fully embraced enclaveing. The network is fully segmented based on function.

In organizations where segmentation or the use of enclaves has not been established, HPSS can still be used and would be deployed in much the same manner.

Please let us know if you have any questions about this diagram or about deploying HPSS in your environment. We would be happy to set up a free consultation with you to discuss how the tool could aid in your detection program and give you increased visibility throughout your enterprise.

PS – If the graphic is difficult to read, right click on it and select view in new tab. The theme for the site is having trouble with this particular graphic. 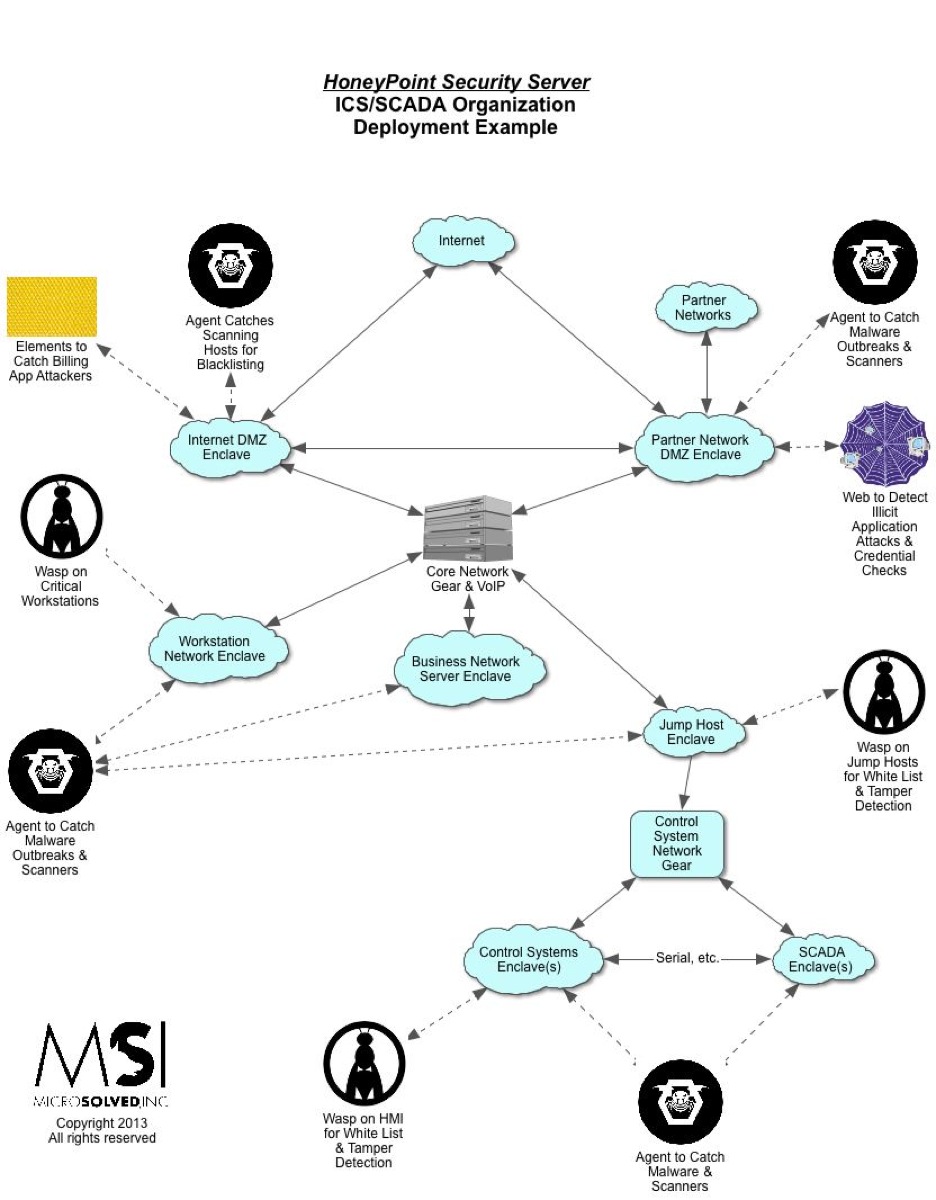 Many folks have been asking us for an “At a Glance” kind of graphic about HPSS. Here is a first attempt. Please let us know what you think via the comments or on Twitter (@microsolved). Thanks for reading! 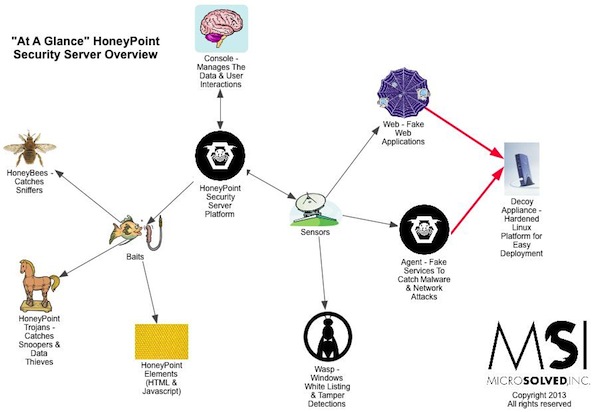 Launched in 2006, initially as a distributed honey pot product, HoneyPoint Security Server (HPSS) has grown well beyond the initial concept. Today HPSS is a platform of components woven into a tightly integrated, fully capable, extremely flexible threat detection product. Organizations around the world are using it as a means of early detection of internal and external attackers, malware outbreaks and signs of users poking around where they shouldn’t be. Mature organizations have leveraged the product as a means of deterring attacks through automated black holing of scanning hosts on their perimeter, embedded detective controls inside their web applications to cut off users violating their terms of service and gather real world threat metrics to feed back into their mature risk management initiatives.

In the world of ICS/SCADA, HoneyPoint has found a quickly growing set of fans. HPSS can be deployed in a completely passive way that has no chance of interfering with critical operations, yet still brings incredible detection capability and vision into even the most sensitive of networks. ICS/SCADA environments have traditionally embraced the honeypot ideal, coining the term “canary” for these tools, but never before have they had such an easy to use, distributable, centrally monitored honeypot capability like HoneyPoint brings to the table.

Over the next few months, we will be deep diving into each of the HPSS components, but for now, as a high-level overview, here is a quick and dirty explanation of each of them:

To learn more about these components and how they can be leveraged to give your organization new, flexible and deep detection capabilities, give us a call. Our engineers would be glad to discuss the technical capabilities and an account executive would be happy to work with you to create a HoneyPoint deployment that meets your needs AND your budget. At MicroSolved, we are passionate about information security and HoneyPoint Security Server is just another that way it shows!