At least in the case of stolen devices.

The fervor for the newest iOS for Apple was building throughout 2011, and those who utilized the Apple iPhone and iPad felt a great sense of anticipation for Apple’s Worldwide Developers Conference (WWDC). Feature speculation floated around the Internet, leading to the launch date of iOS 5. What latest and greatest features and functionality would be announced?

Rumors were laid to rest at WWDC in June 2011 as the late Steve Jobs made one of his last public appearances to promote the launch of the newest mobile iOS, available October 12, 2011. New features included iMessage and numerous integration points with Twitter, the ability to hold your iPhone like a camera and “click” with the volume button, and the ability to sync your device with iCloud. The PC Free feature finally freed iOS users from the cord, no longer requiring them to connect their device to their Mac or PC to sync photos, music and software updates.

As long as the user was sharing the same Apple ID, a photo, for example, would be uploaded to the cloud and pushed to each device running the newest iOS.

During the WWDC keynote, MicroSolved, Inc’s CEO, Brent Huston, spent considerable time on Twitter discussing the lack of built-in security for the new iOS. He made the point that each unique identifier (in this case, the Apple ID) on numerous devices would allow possibly unwanted users to see information they shouldn’t see. He used the example of a parent downloading and viewing patient medical data (such as an MRI scan) on their Apple device. Instantly, the image would upload to the cloud and be pushed to any user sharing the same Apple ID. In theory, the images would be shared with the spouse’s iPad and the daughter’s iPhone or iPod. In the case of medical data, this would pose serious HIPAA/HIPAA HITECH violations.

He shared other examples of syncing photos meant “for your eyes only,” which would be shared into the photo stream. I shuddered when I imagined how many conversations of  “Where were you last night?” would happen as a result.

While the “doom and gloom” scenarios will surely play out (And they did in the case of the gentleman who used “Find my Friend” to catch a cheating spouse.), this newest feature has actually helped victims of stolen Apple devices catch kleptomaniacs.

Recently, the seamless sync feature led authorities in Hilliard, Ohio directly to thieves.  During a home burglary, they stole an iPad among other items. The homeowner suddenly noticed a number of new photos in his Photo Stream — pictures of people he didn’t know or recognize.  As it turned out, the iPad thieves were taking photos of themselves and unknowingly sharing their identity with the users who shared the Apple ID — including the dad who notified local police.

While this is great news in the case of the photogenic iPad snatcher, it does appear Dad didn’t have the lock feature on; which if he had, would have prevented the iPad from uploading photos to the cloud. We at MSI encourage device users to take advantage of all security features, but in this case, the father’s actions (or lack thereof)  worked in his favor.

Moral of the story: educate yourself regarding your device’s safety features and utilize the GPS function when needed.

Stay safe out there! 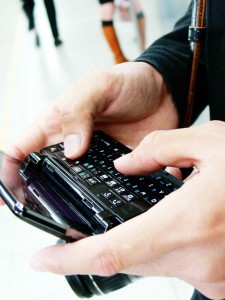 Lately, we have been looking at a lot of banking apps and front ends for the iPhone, Android and other mobile devices in the lab. Our testing thus far has shown some great results and it seems like a lot of banks, credit unions and other financial institutions are interested in having an “app” for their customers and members. Many of these apps are well designed, deep and rich. Many are simply canned front ends to existing web page content and functionality. A few are just plain horrible.

Here are three tips for organizations to keep in mind when coding their banking and financial apps for the mobile devices.

1. The mobile devices are not PCs. The apps should be light weight, clean and easy to use. Usability is tied to security in this case, because of errors. If your app has tiny little buttons with confusing text, no confirmation dialogs and lacks other basic usability features then you make it easier for users to make mistakes, create bad transactions, get confused and other issues would could constitute a risk for your business and your users. Don’t design for a PC monitor. Make sure your designs are usable on the appropriate size screens and with appropriate space for human digits.

2. Don’t allow users to store their credentials in the app or its underlying data structures. Many mobile phones and such remain woefully unsecured. Even where the vendor has provided for basic security controls for the devices, many users do not use them. Plan ahead for this. The app has to be convenient, but it shouldn’t let the users place undo risk on themselves. If you allow them to store logins, or even a digital certificate, make sure they can’t also store at least 1-2 other pieces of credentials between uses. If someone just picks up their device, they should NOT have access to the users accounts.

3. This goes without saying, but don’t forget encryption. Just because an application uses the cell network, does not mean that you don’t need SSL. (I’m looking at you two developer groups in the last 90 days, you know who you are.) No matter the network, protect your transactions and data streams with strong crypto. The mobile devices can handle it. They can do enough lifting to handle SSL or they shouldn’t be running a banking app. Like Nike says, “Just Do It!”

There you have it. Three basic ways that you can help increase the safety and capability of your financial services app on the iPhone, iPad and other mobile platforms. If you have done these three basics, then you are off to a start. The next crucial step is to get your app and the back-end processes checked via a risk assessment and security test. Give us a call if you need assistance or want us to drop it into our testing lab process. We are seeing quite a few of these days.

Today was my first real chance to try out the iPad as a VPN client in a critical situation. I needed an essential file for a client in a real hurry. We were about 50 miles from the office and a physical return with the file wasn’t possible. Even worse, it was stored on an encrypted vault volume on my personal backup system, so none of my engineers could assist me, since they lack credentials for that box.
Thankfully, I had my iPad with me. I had already set up a VPN connection for my device, but hadn’t yet tested it. The good news is that it worked perfectly! I was able to quickly create a VPN tunnel back to my network and then SSH into my vault. Once there, I could effortlessly arrange for a file transfer to my client in a secure manner. I even piped a VNC connection over the tunnel using iTeleport and could interact with the GUI nearly as easily as on a laptop.
All in all, it was a great save and made an excellent real world use case for the iPad in my work flow. Have you had any other big successes with the iPad in your security work? If so, drop a comment and tell us about it. I look forward to reading about it!